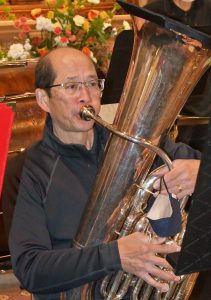 Like many musical ensembles in Maine, the Maine Pops Concert Band has been through some tough times during the COVID-19 pandemic. They’ve dealt with restricted or closed rehearsal venues and seen a series of scheduled concerts cancelled. Even through the band remained active, it performed with fewer members and spent eight months in make-shift home recording studios to produce a virtual Christmas concert and a series of single releases published on the band’s web site and social media channels.

With the return of live, outdoor summer and fall rehearsals, and the completion its first public performances after nearly two years, the Maine Pops has slowly recovered much of its membership, recruited new musicians, and regained most of its balanced and full pre-pandemic sound.

But as the band’s musical resurgence continues, it is still in need for support from its Greater Portland Metropolitan Community; support in the form of community sponsorship and donations to help defray costs. This winter, as the band heads into its holiday break, !it is resuming its campaign to bring additional funding into the organization and keep and needs help.

“Our mission is to support community though concert band music and we continue to play, both virtually and in-person when safe,” said Bob Swerdlow, President of the Maine Pops. “We now need your help to ease the financial burden the pandemic has created.”

The COVID-19 pandemic in Maine has been hard on many non-profit organizations, especially on concert bands. Swerdlow said the pandemic has been expensive for the Maine Pops and its earned revenue is down substantially. “The band did not collect membership dues for the 2020-2021 season, and we have had no concert ticket sales, advertising, or sponsorship revenue for nearly two years. Yet, many of our expenses persisted right through the pandemic.

“We continue to employ our music director, David Watts, who has been exceptionally flexible and creative in his work with the band during this difficult time,” said Swerdlow. “We also continue to buy music, maintain our online presence, and incur all other necessary expenses.”

Swerdlow said that during the pandemic’s early stages, it became clear that it was not safe for bands to play in person. “Our biggest concern, from the beginning of the pandemic, has been the safety of our members,” he said. “Wind instruments, by their nature, disperse aerosols, and many of our members are old enough to be at high risk. For caution’s sake we cancelled our Spring 2020 concert and all in-person rehearsals. We were not sure the Maine Pops would survive.”

The band’s board of directors spent many hours in Zoom meetings discussing options, and in August 2020, Swerdlow sent a video (https://drive.google.com/file/d/1PtqHEhWo70qswo-zydfOrm9ZaXfdm-aC/view?usp=sharing) to the band outlining its approach. The message to the band was clear: “We need to be safe now, but we are strong, and we plan to be back. We are a close-knit community of dedicated musicians, and the Maine Pops is here to stay.”

From that video release, the band increased their efforts to rebuild and perform, starting with virtual, Zoom-based, muted rehearsals performed in homes. By December, band members had produced a 51-minute Christmas holiday concert - a performance that helped the band raise over $1500 in charity donations to local food pantries.

During the 2020-2021 pandemic, the band also:
• Recorded and released virtual performances of “You’re a Grand Old Flag,” “A String of Pearls,” “Seventy-Six Trombones” and “Tuxedo Junction” between February and May 2021.
• Recorded and released a virtual R. B. Hall Day performance of R. B. Hall’s “New Colonial March” featuring over 50 musicians from all over Maine and beyond.
• Posted all virtual performances on the “Maine Pops” YouTube channel.
• Began outdoor in-person rehearsals for vaccinated members in July 2021.
• Performed our Fall 2021 - “Americans, We” -- our first live post-COVID concert, at St. Luke’s Cathedral in Portland on November 21 with pandemic restrictions in place for both the musicians and the audience.
• Performed “A Cathedral Holiday” concert at St. Luke’s in Portland on December 4 and will perform “Charity Christmas Concert” at Mountainside Community Church in Falmouth on Wednesday, December 15 at 7:30 pm. Again, pandemic restrictions were in place.
• Streamed all live concerts on the “Maine Pops” Facebook page.

After falling from a roster of over 80 to fewer than 20 players during Zoom rehearsals, Swerdlow said the band has now rebuilt to over 50 members, including more than a dozen new musicians The band has resumed receiving membership dues for 2021-2022, bringing needed revenue. The band also received donations from its November 21 concert.

However, the band needs more funding as the band begins planning for its spring and summer season with hopes for a full concert schedule. Members of the band’s marketing committee are working to contact current sponsors to maintain their support, while also venturing other community assets for support. “Your donations are critical to our future,” said Swerdlow. “With your help we will continue to build community through music for years to come.”

To become a sponsor, please email Bob Swerdlow at president@mainepops.org.