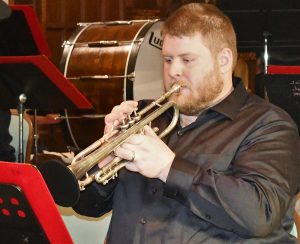 The concert was an extremely welcomed event not only to Maine Pops members, but also to the gathered audience attending band’s return to the stage for a live musical performance. The last time the Maine Pops performed an in-person concert was the Christmas holiday benefit concert December 18, 2019 at the former West Falmouth Baptist Church (since renamed the Mountainside Community Church).

In thanking the audience for attending, Maine Pops Director David Watts shared the sentiments felt by many band musicians. “I appreciate you coming out,” said Watts, adding that it’s wonderful to have people here to watch and enjoy the band’s return after the long absence. Watts spoke of his pre-concert chat with the band before going on stage, telling the audience that “it just almost doesn’t seem real to finally be back and performing…this is great.”

Following the playing of the “Star Spangled Banner,” attendees were treated to a variety of music that included a Benny Goodman medley, a new arrangement of the hymn “Precious Lord, Take My Hand,” a Bruno Mars medley, and Toto’s “Africa.” The program continued with highlights from the musical “Chicago,” Eric Whitacre’s “Sleep,” and John Williams’ “Star Wars: The Rise of Skywalker,” before concluding with Henry Fillmore’s “Americans, We.”

For those who missed the live performance or the live stream, the Maine Pops Concert Band’s fall concert for 2021 can be viewed at: https://video.ibm.com/recorded/131160736.

Prior to its final number, band president Robert Swerdlow thanked the audience for its attendance and their donations, as well as the volunteers, sponsors, and musicians that made this emergence possible. He thanked Ben Shambaugh, the Dean of St. Luke’s Cathedral, for hosting the concert, then made a special presentation to Watts – a framed letter from the Maine Pops Board of Directors and a gift, recognizing his efforts to keep the music going throughout the pandemic. The citation reads:

The fall concert was the culmination of a long-term process to return the Maine Pops to normalcy. After shutting music operations down in March of 2020, the Maine Pops remained inactive until October, when the band began holding Zoom meetings and online, muted rehearsals, using recorded soundtracks of music as a guide. This led to a 52-minute virtual Christmas concert in December 2020, followed by a five-part series of virtual music releases through the band’s YouTube channel.

The Maine Pops resumed in-person, outdoor rehearsals in Falmouth, starting in July and remaining outdoors until late October. They are currently rehearsing in the fellowship hall of the Mountainside Community Church in Falmouth while looking for a more permanent indoor rehearsal venue.

The Maine Pops Concert Band is a 501(c)3 educational non-profit corporation. Individuals and organizations wishing to become a band sponsor should contact the band president at president@mainepops.org. Contributions may be tax-deductible.